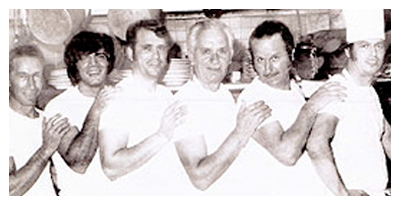 Frank Perrone was born in the town of Corato,  located in the Bari province of the Apulian region in the  southeastern part of  Italy.  On July 5, 1946 to Lugi & Maria Perrone (he was #4 of 9 children). His Father immigrated to America in 1960 to earn a better life for his family. He got a job in a restaurant as a dishwasher, that restaurant was Doria’s. Franks older brother Dominick came to the U.S in 1962 also to work in Doria’s, but left Frank to care for the rest of the family back in the old country. By 1964 Luigi  had earned enough to reunite the family in the America. Frank recalls “The first morning I woke up in our new home it was Easter Sunday. Back home nobody worked today, Osch e Fest (translation: Today is a holiday). I put my Sunday’s best on and met the family for breakfast. My father and brother looked at me like I had two heads. They thought I was nuts! My father said hurry up and eat we have to go to work early today. I was shocked, but Pop I said, today is Easter…what work? My father said in America everyone works on the Holidays.” Disappointed and upset, Frank knew things had to get done after all. “That’s why we came here isn’t it.” He wasted no time, and like his brother and father, he went to work. He and Dominick worked every station in the kitchen from the dishes to salad, to pizza, and the line. Within a few years the Two brothers we 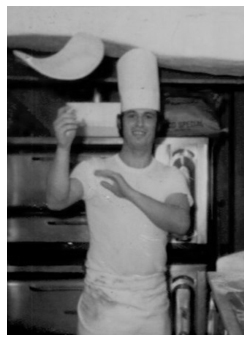 re approached by the Doria family to assume the restaurant. On November 1, 1971 they were official restaurateurs. They opened the doors with a full restaurant, full bar, stocked kitchen and no money in the bank…which drove them to in-sure their success. They had the backing of a large family, even hiring most family members once they took over. Luigi(Frank’s father) got a promotion to “head daytime cook” which meant he was to make the secret home-made rugusauce and watch the restaurant when the brothers were not in. He was the policemen of the family. Frank’s brother-in-law Cicci Merra and his son-in-law Little Dominick were also hired for the line.
Frank’s father-in-law, Joe, was involved in the prep during the morning shift. Frank’s younger Brother Charlie got in the kitchen at an early age. Also, people who had worked in the place for a long time eventually became part of the family. Times were good and the family was getting bigger. Dominick was married and had two boys Gino and Peter. Frank also married and had two kids, myself (Louis) & Maryanne.
The best thing was that they both married women named Angela. Fast forwarding a few years, after lots and lots of gnocchi, manicotti and raviolis, opportunity came knocking again when they were able to open a second restaurant Pier 5 a few doors south of Doria’s. Pier 5 had originally opened as a fish house not to compete with Doria’s. After a while, the seafood menu was not like all the pastas and pizza, it was tough. So they added a touch of Italian to the menu and since Frank was in the kitchen, “certain” people dubbed it as Frankie’s. Ultimately, they added “Frankie’s” to the name, and it became Frankie’s Pier 5. It was a Golden age for the Perrone brothers. Both of their establishments were thriving, but faith would make them an offer no one could refuse.

In 1985, there was a rumor that the State of Florida was going to expand Route US-1. At first they thought it would never happen, but when DOT came knocking they knew they had to make a move. In 1987, they acquired a piece of property that had been occupied by an old restaurant, The Sea Inn, but the building was in such disrepair they decide to make way for a new upscale Italian restaurant. But they had the Doria’s name out there and did not want to put Doria’s on the new place, so they decided to bring the name over to Frankie’s Pier 5. So then the name became Doria’s Pier 5. The name they would put on the new place was decide by the whole family (even the kids got a vote) and the winner was Villa Perrone. It was truly magnificent, 8000 sq ft of dinning space and a kitchen that would make any great chef shiver. In the summer of 1988, the doors opened again for the brothers. The first two opening nights were by invitation only and all of the Hollywood and Hallandale elite were present. Years and years of clientele attended, but the most fitting part the night was a speech given by a wonderful customer, Rudy Lurch, who had presented Dominick and Frank with a Lifetime Award of Success. He even went so far as to write a letter to President Reagan in hopes that he could issue an award from the White House. President Reagan did acknowledge the brothers for their success with a letter of congratulations. Then Mr. Lurch called up the man who 28 years earlier came to this country with virtually nothing and recognized how his boys earned the respect of so many people. When Luigi took the stage with his wife, tears of joy and triumph were shown not only by him, but by many people in the crowd. It was a celebrated evening for the entire family. It would take two years for a guest on a Saturday to get a table, even with a reservation. Truly another winning dinner bell had rung. Just when all was good, the family was hit by its first tragedy. In early 1989 Luigi was told that he had a bad heart and an aneurysm that they could not operate on (due to his week heart). They tried numerous delicate procedures, but by the fall the aneurysm had failed and a once strong family had lost their backbone. For the first time, except on Christmas Day, both restaurants closed down for business until after he was laid to rest. Maria took it the hardest, since he had passed on the day of their 50th wedding anniversary. She lived on a few years, saw all the grandchildren and great-grandchildren grow a little more, but eventually was admitted into the hospitable for ammonia. We said it was her broken heart that put her there, she passed in late 1992. The family was given another blow, but ready or not life had to move on. 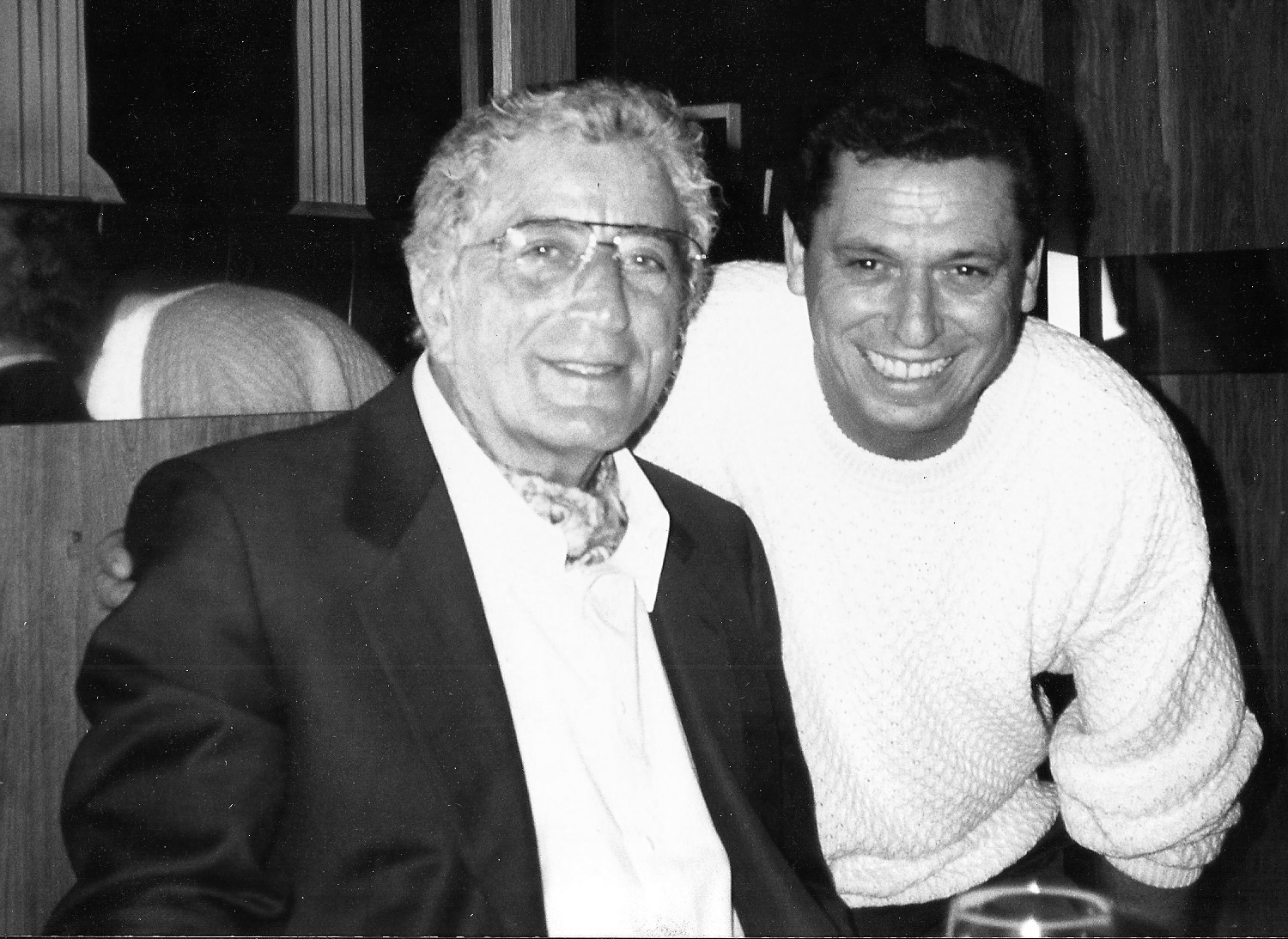 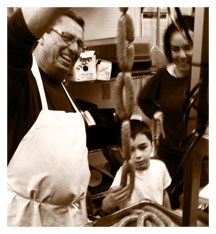 In 2009, the Perrone family had leased out Frankies Pier 5 in Hallandale beach due to “an offer we couldn’t refuse” and started wondering where to” open a new kind of restaurant”, Franks Younger Brother Charlie and his Wife had moved up to northern Georgia (Ellijay) and had opened Charlie’s Italian Restaurant & Pizzeria, And done well … very well so well that they too well be opening a newer, bigger & better Charlie’s summer of 2011. He had told us that a “our kind of place would do well up here” and within a couple of years we had set our sites on a little town in Western North Carolina… Called Maggie Valley. Nestled in the stunning Smoky Mountains about 30 west of Asheville. An opportunity had risen, Now we focused on opening a new kind of Italian Restaurant. The definition of Trattoria is that of a Italian-style eating establishment, less formal than a ristorante, but more formal than pizzeria, So once again my Father started looking to the future for his family, and I (Louis) had been taking a big interest in the restaurant for quite some time. and again we look into the future with a new generation to help carry on the tradition of fine food. I can’t imagine how they did it? With a couple dollars, and hard work, they made dreams into reality. My Grandfather was a great man. He came here alone (having to leave his family behind – as hard as that was), held up his chest, put his tears behind him, and made it possible for me to tell this story. 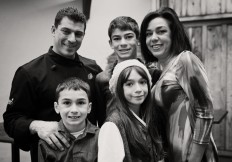 Frankie’s Trattoria has been serving South Florida since 1971 by chef/proprietors Frank & Louis Perrone, awarded Chef of the Year by the American Academy Association and winner of the Five Star Diamond Award.
More about us ›

While choosing a table with us know our Lounge Area is very happening, very energetic and more casual, Then we have our original dining area (with no bar) table cloths and slightly quieter dinning space. Also we are very limited on large parties seating (6 or more). If the time your needing is not available then please select another dinning time